I love picture books. Not all of them. I lean away from super silly and toward the ones with really cool language. Picture books let writers play with theme and plot without worrying too much if something makes sense to adults. They follow kid logic. They can also get away with prose that would never fly in popular adult books because we grownups are far too stuffy for our own good.

One of the few bedtime stories I tell my kids from memory is the story of the Big Bang; how the elements were created in the bellies of stars, and how those elements formed Earth and all of the things living in it. “We’re made of star stuff,” Carl Sagan said, much more succinctly. I tell my kids they have stars in their bellies.

This very topic is covered in Marion Dane Bauer’s wonderful picture book, The Stuff of Stars. She starts before the Big Bang, actually, and I can only imagine she worked on this first sentence for months.

It’s a beautiful sentence with repetition of the prepositional phrase “in the dark,” (but with a twist on the third one), and ends with two mind blowers. The speck is impossibly invisible — no light yet exists because there are no stars — and it is impossibly massive–the speck contains all the matter that will ever exist in this universe.

This diagram was fun because it switches back over itself; it breaks all the recommendations about keeping modifiers with the thing it modifies. Those evocative prepositional phrases at the beginning of the sentence modify the verb (floated), and then the adjective phrases at the end modify the subject, (speck). It’s all switched around.

I love how this diagram draws visible, stark attention to the main point of the whole thing: speck floated. The rest of the book is about that speck and the amazing things it does and becomes after it floats in the deep, dark nothingness.

Here’s how she describes the main event itself: 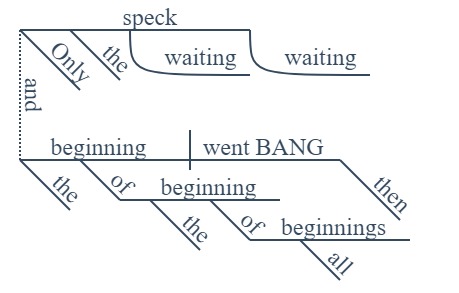 So the first part… not exactly grammatical. I did my best, but it felt weird not having a verb to go along with speck (because “waiting” is a participle, both times). Perhaps there’s a better way to diagram this (if so, leave me a comment!).

Anyway what drew me to this sentence was that cool waterfall “the beginning of the beginning of all beginnings” (here again she has a trio of prepositional phrases, with a twist on the last one), but I didn’t end up enjoying that little staircase as much as I thought I would. However, I was surprised by the two “waitings,” one leading into the other like a wave.

Again, here, the diagram reveals and emphasizes the main point of the sentence–and the story itself, in the main clause; “Beginning went bang” is as descriptive a way to describe the Big Bang as anything else.